According to The Know and an anonymous source relaying information to them, Half Life 3’s development has begun to wind down with plans within Valve pointing towards the cancellation of the popular, cult-followed FPS.

The Know’s insider has claimed that the team working on Half Life 3 has dwindled from the hundreds in 2009 to just 10 people today. While the story, gameplay, and script is already in place, the game is not being prioritized by Valve due to pretty much only negative reactions possible if they were to release the game.

According to the source, Mass Effect 3 — yes, Bioware’s RPG — is a major influential factor in convincing Valve that a release is not worth the great potential that the game would underwhelm; especially when the hype surrounding the game is so high. Apparently the extreme negative reactions circulating the final game in the Mass Effect trilogy convinced Valve that there is no possible way that they can release a game perfect enough to live up to what people would hope for and any release would be a disappointment to far too many people.

In addition to comparing Half Life 3 to other similar releases, Valve’s current status as a business is so incredibly successful with Dota 2 and Team Fortress, and the microtransactions within the games, that there’s no financial motivation for the game to come out.

While it is important to remember that this is a rumor and to take anything coming from an anonymous source with a grain of salt though the reasoning behind the potential cancellation is sound. But if the game does still have anyone on its development team than perhaps it isn’t time to give up all hope just yet. 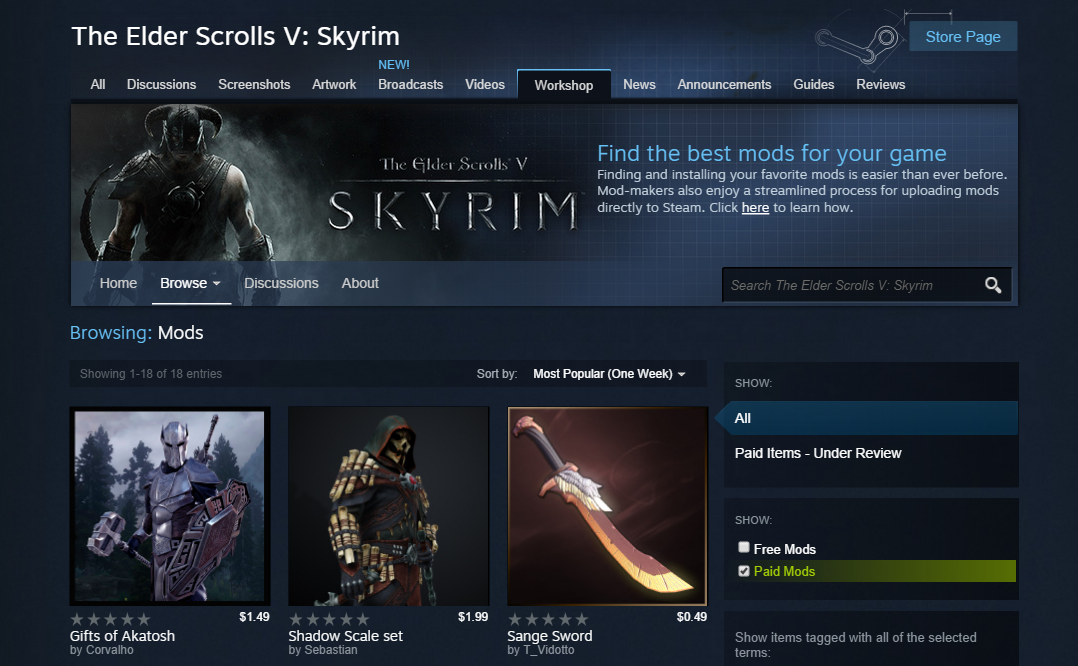 Ah, so the hysteria begins as a major gaming company looks to increase revenue just as any company would. For many fans Valve’s recent introduction of paid mods has been acknowledged as the figurative end of days with heightened concerns over the seemingly more and more chopped up products that people get with DLC often being needed to experience a full game.

Though the current outrage comes from an inability to consider the exact intentions of what Valve is doing here. Many seem to suggest that the standard process of downloading any of the freely available mods independent of Valve is no more, but that is not the case. All current mods remain unaffected. Valve simply offers the opportunity for these mods to be monetized with the Steam Workshop.

(Note, opportunity; mods can still be offered for free even on the Steam Workshop.)

When gaining an understanding of the reasons behind the new addition to Steam, it becomes much more reasonable why it has been implemented in the first place — the biggest reason being incentive.

Modders have long created incredible projects with millions of users downloading mods for Steam games, but those developing these mods have done it for little reliable monetary gain. Sure, donations can offer some compensation, but the skills of some of these modders is clearly incredible. That type of money simply does not do a good enough job to create great, consistent mod teams who work independently from major companies to create significant additions to games.

If a modder can support themselves (or at least partially support themselves) based on the hard work they do to benefit the gaming community there is no adverse impact other than people needing to pay a few dollars for a reliable market to access custom content from.

This is exactly what Valve is offering and it should be seen as much as an opportunity for mod developers as it is a market for consumers. Modders can set their prices, track their revenue, and work as a team with Steam offering payment methods that accommodate multiple people.

The biggest problem with the current stance of the system is the lopsided revenue distribution with Valve taking the majority of all profits. The idea of giving modders a platform to support themselves and create bigger and better content is fantastic, but Valve’s being a bit too greedy when it leaves these modders with only a 25% return.

The current revenue going directly to the mod developers is not good enough for independent modders looking to support themselves.

Still, the more successful pieces of content should be profitable enough to bring dedicated workers to the field and even the possibility of devoted mod studios could come to fruition. Imagine high quality designers, audio specialists, and coders coming together to create small custom additions to games like Skyrim, Call of Duty, Borderlands, or Grand Theft Auto. Financial incentive is how you can make this happen.

The new Steam Workshop addition will create a professional environment and platform for modders and mod teams to monetize their work and create incentive for higher quality content to come as affordable mods from this point forward.

With the new generation consoles just starting to hit their stride, new VR technology being revealed and released, and markets around the world flourishing, the games marketing research team at Newzoo is anticipating massive revenue gains by the end of 2015.

America alone has leveled out at a steady $22~ billion but the industry is expecting to see massive gains in China, the Asian Pacific, and Latin America. China will now surpassed that of the American market with a $22.3 billion value after a 23% increase over the last year according to Newzoo’s most recent report. The exploding eSports scene and mobile platforms have been contributing significantly to this recent surge.

Tablets and smartphones especially have undergone significant growth with tablet games up 27% and phone games up 21%. Between the two platforms they take on a third of all industry value with $30 billion.

Despite all this success handheld consoles are still on the decline with a 17% projected loss. The fall of the Nintendo DS and the PSP are clearly evident, and it seems that it won’t be changing anytime soon especially with the new, greater convenience of smartphone games.

Though the overall success of the industry is fantastic as it currently stands, gamers and investors can expect even greater gains in 2016 and 2017. Virtual reality headsets are just beginning to expand and with Valve and Sony readying their new tech for the end of this year a new sub-industry will bring even more revenue in for the companies that get involved early.