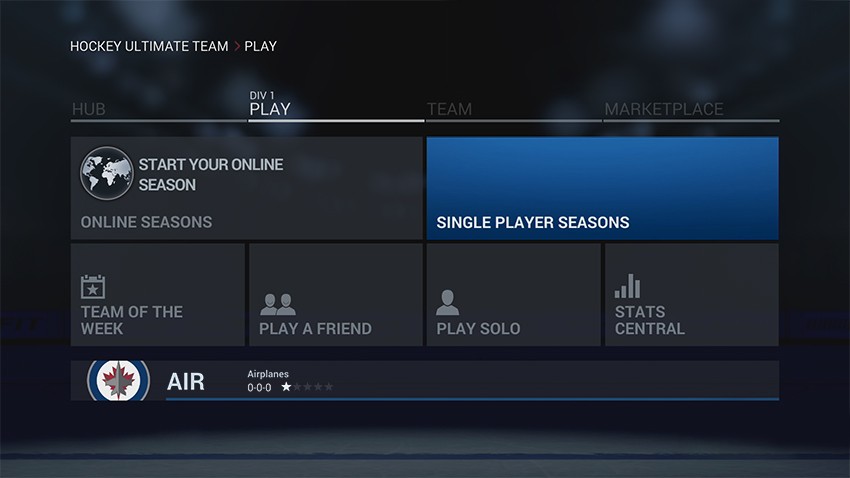 After going into its release with great expectations, NHL 15 struggled to deliver on what many expected of the 2014 Best Sports Game winner (E3 Critic Awards). The game failed to give players the full selection of game modes that had been a crucial aspect of the franchise for the previous seven years. Now, EA Sports is coming back with a new focus in NHL 16 as they look to build a great game around the fantastic gameplay that’s already in place.

The most notable game mode to return is the beloved EA Sports Hockey League (EASHL) and its 6v6 gameplay offering players the opportunity to create their own character and take him or her online as a part of a club. While EASHL and the other game modes were incorporated into previous generation versions of NHL 15, the new generation was left with little variety in the ways players could play. This year of NHL looks to offer everything that should have been there since the last NHL release.

Outside of the online team focused mode, the Be A GM mode that is apparent in all EA Sports games in some fashion is also getting some fine-tuning a minor additions. A new “Player Morale” aspect is being incorporated giving each player on a team a designated personality that needs to appropriately meshed with the team as a whole. GMs can now call team meetings or adjust the roster to ensure that player performance is at the highest level it can be.

Another major drawback to NHL 15 was the extremely toned down Be A Pro mode. Now major features are again returning like a progression from CHL to NHL, and the ability to sim to your next shift rather than wait on the bench.

Gameplay wise NHL 16 will add improved skating techniques for “refined movements with your skater” and seamless puck pickups create quicker and more fluid animations “giving you more time and control to make your next move.”

And how about some more dynamic beard growth?! NHL 16 will add accurate representations of beard patterns, length, thickness, and growth rates for individual players.

NHL 16 is expected to release in early-to-mid September only on Xbox One and PS4 as the development team drops support for the old generation.

For a full list of new features check out EA Sports’s official release.

After so much promise from their new generation iteration of the NHL series, EA Sports ultimately failed to meet the expectations of NHL 15

for the Xbox One and PlayStation 4.

With major game modes like EA Sports Hockey League and GM Connected (Online Franchise) omitted from the game, EA produced an excellent game based on the gameplay, but left out the variety that kept NHL an exciting game for hockey fans.

Before the official reveal of the game modes just weeks before NHL 15’s release, this year’s game was shown to be incredibly promising after winning the E3 Critic Awards’ Sports Game of the Year.

The award to EA was certainly not understandable. The base of the game is fantastic as the visuals took an incredible jump from the previous generation games. Along with fantastic new commentary and smooth gameplay, it seemed NHL 15 was going to be the best upgrade to the series in a very long time.

But now that the core of the game is set, and the resources allocated to development should be able to handle the addition of the game modes and fine-tuning the rest of the game to make NHL 16 a worth-while product.

Here’s what needs to happen for NHL 16:

While there are certainly other issues and problems that fans can gripe about like there is every year, EA must take an intrinsic focus to ensure that the continuation of NHL on the new generation not only optimizes the bugs and minor issues, but also deliver on the players’ expectations for fleshed out variety of game modes and immediately noticeable improvements.

After having a hefty backlash from the lack of game modes that will be included in the Xbox One and Playstation 4 versions of NHL 15, EA Sports now has a plan of action to bring some key features and game modes back in two monthly updates.

While most all the features being added in the next few months for NHL 15 have been in previous games, there will be two new components to the series as well — “Playoff Mode” and “GM Draft.” (Some small improvements will also be coming to Hockey Ultimate Team.)

Playoff Mode, due to come in the September update, will allow for custom tournaments with up to 16 teams from any league in game. While this mode seems perfect for online play, it will only be available offline. Minor layout changes and new animations will also be coming to the Hockey Ultimate Team U.I. in the September Update.

Coming in the October update, GM Draft adds some more immersion to the NHL draft experience. General Managers will be able to trade players while the draft is occuring and will have the pressure of a time-limit to get their picks in in-time. The mode will likely resemble that of Madden’s drafting gameplay.

EA is clearly responding to the backlash, but it’s unclear whether these efforts will be enough to appease their fans.

With an NBC Sports style presentation and extremely fluid animations throughout, the new look at the gameplay of NHL 15 shows very good reason for it to be the 2014 E3 Critics Awards’ Best Sports Game.

Now with actual video incorporated into the opening of games, Doc Emrick and Eddie Olzyk not only commentate the plays well, but they also bring the opening of the game some much needed life.

This first full look at NHL 15

‘s gameplay trailers shows some major improvements to the flow of action on the ice. Dekes are quick, but reasonable, physical play is more involved, and pucks bounce appropriately when dumped into the zone.

Though it’s difficult to judge the A.I. right now,  they do seem to maneuver a bit quicker to open areas.

One of the most notable changes that NHL fans will notice, is the new commentary. It shows a much greater amount of diversity and detail to the actions on the ice. In previous games the announcer would simply state who received the puck.

Now, we see Doc noting where players are, when plays are heading to high scoring zones, and how players are doing throughout the game.

The additions certainly bring a very next-gen feel to the gameplay. It is by far the most significant jump that the NHL series has undergone since the transition from generation two consoles to generation three.

NHL 15 and all the improvements are coming to Xbox One and Playstation 4 September 9th. The game will also be releasing for the Xbox 360 and Playstation 3, but will be stifled in regards to new features.

(A side note for some NHL fans who believe EA Sports Hockey League (EASHL) and other game modes are not coming to the next-gen consoles — While it isn’t technically confirmed, all game modes from the previous NHL installment will almost certainly be included.

EA’s community manager on the official EA NHL forums stated that the company has been primarily focusing on the new features for the Xbox One and Playstation 4. They have not yet expressed any changes coming to the game modes, but will release more information next week.)

The atmosphere of a hockey game is realized in EA Sports’ most recent iteration of the NHL series.

NHL 15 presents one of the most incredibly immersive sports games ever released. The authentic arenas display oustanding authenticity and the active crowds that include super-fans, taunting opposing crowds, and a great variety of distinct animations, make the feeling of a digital hockey game grow beyond that of arcade hockey.

Beyond the improved atmosphere of the arenas, the gameplay is looking sharp and the visuals look spectacular.

Get an early look at the gameplay as EA will be releasing a demo August 26th.

For just $5 a month (or $30 per year), Xbox One players who subscribe to EA Access will receive 10% discounts to new games and access to the EA Vault –  a collection of previous popular EA games.

You’ll be able to purchase EA Access straight from the Xbox One consoles, or a downloadable code that can be purchased at Gamestop. If you elect to cancel the service game progress and achievements will remain, but the game itself will be revoked.

The service itself is reminiscent of the EA Sports Season Ticket service, that gave players similar early access to games and discounts. Though EA Access just expands that past just sports games.

The service is currently in its beta stages, and those who are part of the beta will receive the first four games of the EA Vault  — Fifa 14, Madden 25, Peggle 2, and Battlefield 4. While all games will be fully available, unfortunately it seems no DLC will be included with any of the titles. New games will be added in the future, but EA doesn’t give a specific time-frame of exactly when that will be.

Those who subscribe will also receive free-trials of games up to five days before release, along with the 10% discount on the full game.

In EA Sports’ 3rd trailer since E3, the NHL series now shows off their overhauled game-engine with entirely new puck physics and 12 player collisions for NHL 15.

The overhauled puck engine will be a massive boost to the series. In previous games, the “puck” actually had the physics of a ball on the ice, but with the new engine pucks can roll, ricochet, and bounce like actual hockey pucks. The 12 player collision will create more realistic bumps and scrums for pucks. Puck control in general is expected to be much improved.

NHL 15 will release on September 7th this year on Xbox One, Xbox 360, PlayStation 4, and Playstation 3.

*It should be noted that many of the promoted features of the game will not be included in the 360 and PS3 versions. They will be in-essence a re-hash of NHL 14, but with new commentators.

New trailers are coming soon, so check back here and  Follow @Pixelpine_ to stay up-to-date.

EA Sports’ NHL series is poised to take a significant step forward from its last seven installments. The last time the series jumped from last-gen to next-gen we saw an incredible difference in gameplay and graphics. It looks like the same will be happening this time around.

While the most prominent difference is the graphical improvements, smaller stories lay behind these newly released screenshots.

What we know so far: