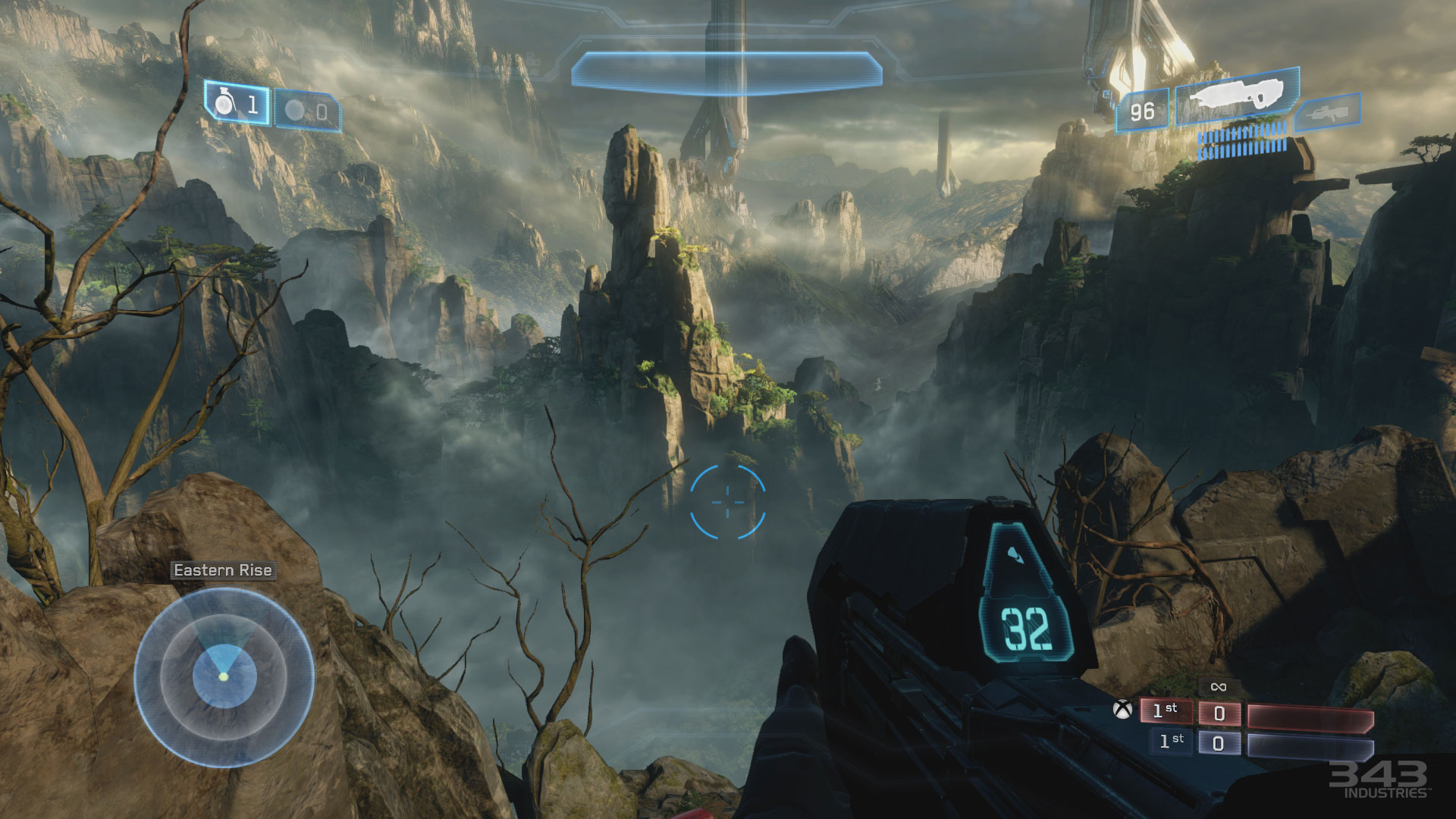 Halo The Master Chief Collection is at first glance one of the best deals ever to hit the Xbox platform. Containing every game of the Master Chief saga and encompassing all the multiplayers into one easily accessibly interface.

This is what was expected of the first-person shooter upon its initial launch and while the collection of games does execute the single-player aspects of Halo extremely well, the multiplayer and inconsistent servers hold back the game from being all that it should have been — at least until the developer is able to address and optimize the online gameplay.

If you’re buying Halo to re-experience the beloved story of Spartan 117 and Cortana, then you’ll be enthralled by the Master Chief Collection. With upgrades all around, more detailed story telling through terminals, and an intuitive interface that connects all the games, the Campaigns of the Master Chief Saga are excellent on this Xbox One port. The experience is easy to jump straight into, and 343i allows for players to play any mission in any order they so please.

A game that some say was the primary force behind the original Xbox’s success, Halo: CE may be over a decade old, but excellent gameplay mechanics persist over the years and the addition of contemporary graphics make the classic story fun to play again.

The ability to switch between the original visuals and the updated looks is quick and lets players appreciate just how many upgrades that 343i has made to the game.

The audio is tuned as well albeit just slightly in Halo 1. The sounds themselves are virtually the same. The iconic soundtrack still plays just as it did 13 years ago.

While this is the first time many are getting to play the Anniversary edition, the Xbox 360’s iteration of Halo: CE Anniversary had some surprising features not present on the Xbox One. Given how much greater the emphasis Microsoft has had on the kinect on their new console, the MCC version of the game leaves out the original Anniversary kinect commands like “scan” and “analyze.” The commands weren’t particularly that vital, but still an interesting niche non-the-less.

Adding in the “terminals” that were first utilized in Halo 3, the recreation of the original Halo utilizes them in a more eye-candy fashion with quick cutscenes describing some background on the game and foreshadowing what the future holds as you progress — as opposed to that of Halo 3’s abstract text logs. The terminals here actually don’t operate in-game as they once did. Instead, the console will take you to a separate app to view the clips. This seems unnecessary as the original Halo Anniversary had the clips play straight from the game itself without having the players actually leave the open game.

As a singular entity, Halo: CE Anniversary is fantastic, and offers a captivating story with gameplay that is still on-par with other games of today. Its level progression is great, and while there will be some minor A.I. issues and bugs along the way, nothing is significant enough to jar the experience loose.

What is rightly regarded as the most anticipated part of the collection, Halo 2: Anniversary operates in the same vein as that of Halo: CE Anniversary, and much of the appreciation for the game is the same.

Some sounds of the game are entirely re-done and the soundtrack is upgraded as well, but the visuals are what everyone will notice immediately. With the same one-button switch between the old and new graphics, the improvements are incredibly evident.

When played in sequence Halo 2: Anniversary stands out among the rest. Most would be astontished to find the game core of the game is truly identical to the decade old title. The gameplay and graphics are as good as any current FPS available today.

The in-game graphics are fantastic, but the CGI cutscenes by Blur are absolutely incredible and allows first-time players to experience an even deeper immersion into the Halo universe.

The addition of terminals to Halo 2 is identical to that of Halo 1 and again takes you to the outside app to view the cinematic.

Halo 2: Anniversary could have easily stood on its own as a $60 game just as Halo 1 did on the Xbox 360. To see the game bundled with all the other titles is a tremendous bonus

While they don’t quite get the anniversary treatment, both are great additions to help players fully enjoy the story of Master Chief, and help build the anticipation for Halo 5.

When the Xbox 360 released and the first footage of Halo 3 was revealed, the graphics of the game were above and beyond most of what had been seen on the Xbox platform. Now, when you re-play through the campaign and complete Halo 2: Anniversary with the awesome Blur Studios CGI cut-scenes, you’re thrust into the off-putting lower quality world of Halo 3.

It isn’t awful, but in comparison it just doesn’t seem to keep up with the quality of the other games — especially during its own cut-scenes.

During gameplay minor visual tweaks have improved things a bit, but nothing all that noticeable. Most people will not notice any differences outside of the improved resolution.

Halo 4 itself was strangely exciting. Out of all Halo’s this is still the most suited to the contemporary play-styles that most games have today. The graphics are the same as they once were, but at 1080p 60 FPS, everything looks fitting of being on the new-generation of consoles.

343i ability to re-master these classic Bungie titles’ campaigns and port their own Halo 4 story onto the Xbox One is marvelous.

Update: Over the subsequent months following The Master Chief Collection’s release the multiplayer aspects of the game have vastly improved and any negative impact it has on the game is now nominal.

For all the campaigns do well, the multiplayer does just as well… if only we could get to it. With every single multiplayer map included — even those from the Halo: CE PC game — The Master Chief Colllection’s multiplayer promises so much and does deliver on setting them up.

In addition to the previous maps, six re-mastered maps in the Halo 2: Anniversary style bring some new life to the Halo franchise..

When you are able to get into a game, the maps are all the well-made designs we’ve come to expect from Bungie and 343i. The mixture of the new and old keep a great balance of falling back to memories of the first play through some players had and the upgraded style that fits the new-age FPS style.

Unfortunately, the servers struggle to manage the influx of players, and even now as the amount of players begins to dwindle down, the servers still leave players waiting for extended periods of time (10+ minutes) for just one single match. Often times when a match is found, the player balance is uneven, and without ranking systems players are constantly thrown into a mishmash of general players with no guide of who is an experienced veteran of the game and who is a new-comer.

As the game launched there were a variety of game modes that promoted classic game-types like team-swat and rumble pit, but since the dismal launch for the multiplayer the game modes have been removed with promises of addressing overall playability of online modes first and foremost and addition of more game types later on.

With how much the multiplayer was loved by fans this is a recipe for failure. Halo 2’s multiplayer, which was what hooked many players onto the Xbox Live platform and enticed many players into buying the Master Chief Collection in the first place is fantastic, and many of the multiplayer game-types that are still available remain centered around the second game of the franchise.

For all the faults the game has with connecting and the server-side technical problems that hold a smooth experience back, every single one of the multiplayer games is exceptional when you do get into a match.

The weapon balance is excellent through the all of the games. The control schemes are easy to manage through universal controller set that players are granted to change to whatever they prefer.

Customization isn’t quite as in-depth as it once was. Rather than allowing players to create custom armor configurations like they had with Halo 3 and 4, an assortment of all completed armor sets are available for players to choose is instead made available already unlocked.

The game itself is very well made and, if not for the server issues, would feel like a finished product.

It’s definitely improving though. With each patch the online matchmaking finds games quicker and small bugs are cleaned up, but its still not quite where it needs to be.

But as of now, 343i will need to keep churning out updates as fast possible to keep the fanbase satisfied.

As the technical issues are sorted out and the developers work to get the game running smoothly, The Master Chief Collection essentially delivers on only half of the game. The single-players are well-done and allow players to experience the riveting story of the Halo games. But despite what it does well on the campaign fronts a reliable patch is still needed to create a more fluent online experience.