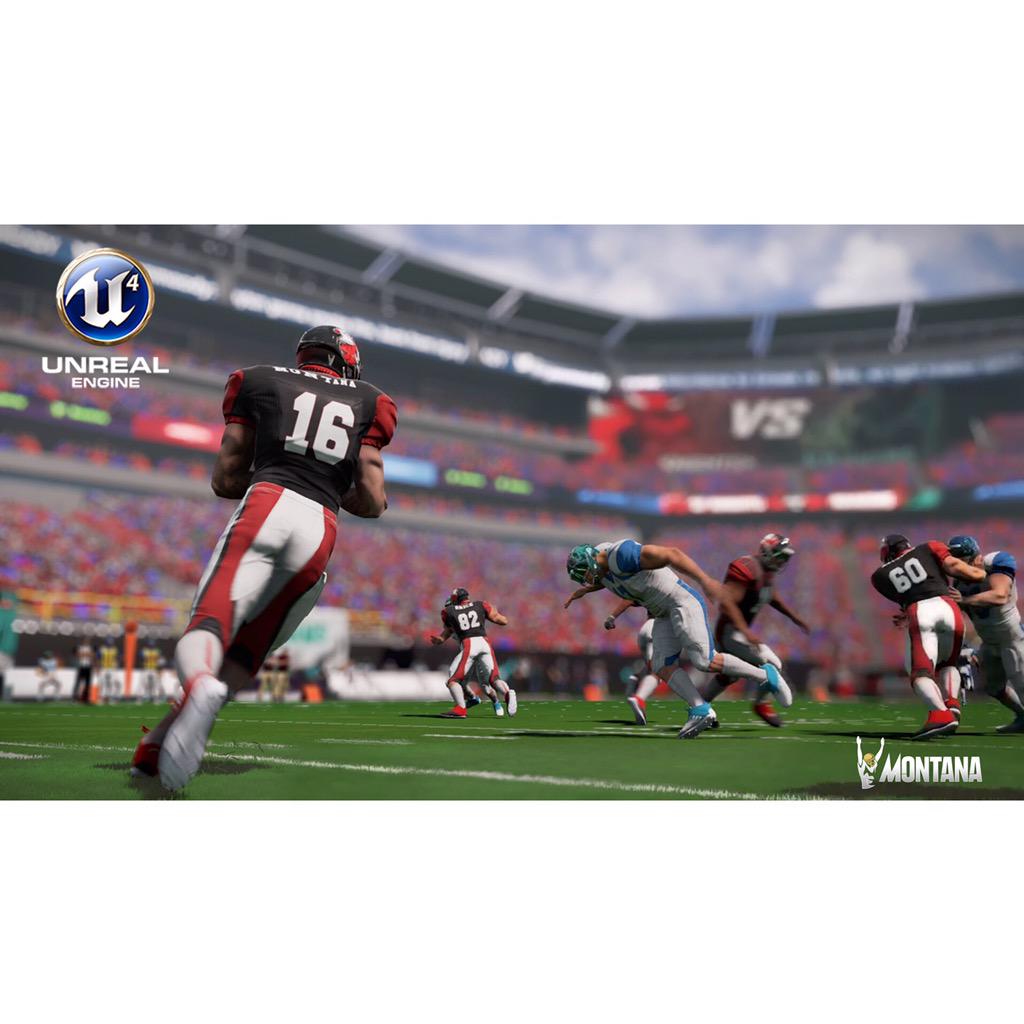 After a long stretch of holding a monopoly on football games, EA Sports looks like they will be getting some competition in the American football realm as 2k looks to re-enter the industry for the second time since EA Sports began their exclusivity contract with the NFL in 2004.

This will be the second era of Joe Montana Football releases. The 49ers’ legend and Hall of Fame quarterback had initially branded a four year run of NFL games in the early 90s on the Sega Master System and the Sega Genesis.

While this will be the only alternative to the Madden franchise on the new generation consoles, it will unfortunately still be without the NFLPA and NFL license agreements that would bring the real players, jerseys, and teams. The only tweet of an actual in-game screenshot shows what most could expect — unlicensed teams and (outside of Montana) generic players. Despite the lack of NFL authenticity the game is shown to have some high quality visuals being developed in Unreal Engine 4.

So Joe Montana Football 16 is confirmed and it will likely be coming to consoles — but details regarding how the game will get there is uncertain given the publisher is still unknown. Even who the game’s developers would still be hazy if it weren’t for a few helpful hints from Montana himself.

Later, Montana retweeted the same artwork shown here, but with a 2K Sports logo overlayed onto it.

More details will surely arrive soon, but who releases the info is to-be-determined.

Coming to all eight major platforms at its release, FIFA 15’s launch was an incredible success. Xbox One and Playstation 4 were responsible for 54% of sales while the 360 and PS3 steadied at 45%.

Charttrack shows the popular football game has even overtaken Destiny in their weekly charts. This may seem like Destiny is falling, but the reality is that FIFA’s popularity is just so prominent.

Unlike last year’s 12 week delay to the NFL on Xbox One app, a new updated NFL app will be ready from the start of the regular season. This new app will be one of the first “universal” apps that will be available on multiple Windows devices.

A redesigned fantasy football feature will be included as well. The fantasy football app is certainly a significantly focus this time around with the snap capable and will allow users to keep better track of any and all fantasy football breaking news or updates. Beyond the snap features, users will also be able to set universal Xbox notifications to keep you up to date with your fantasy stars and top plays around the league.

Due for an August 26 release, the new next-gen focused Madden game showcases a multitude of new features among them are revamped blocking mechanics, improved AI, and a more dynamic tackling feature.

After releasing multiple game trailers throughout the month of July, EA has given a very clear picture of what players can expect from the installment. While the game at its core doesn’t show much change, there are still plenty of behind the scenes upgrades to like.

The updates to the franchise focus on some of the game’s most struggling characteristics. With promises of more aware safety play and more realistic passing pockets, the typical hailmary plays and deep passes over the middle are sure to be much more difficult for the offense.

Along with the improvements to safety play, a new tackling mechanic will create a very different defensive experience. In previous Madden games tackles were relatively straightforward and simple to execute. Madden 15 adds a “tackle cone” to help visualize the best time to take down the ball carrier. The new mechanic will help new players quickly acclimate to the game and help those new to the franchise improve quicker than they would have in past games.

And even players do struggle to understand the more complex gameplay Madden 15 will also include a new gamemode — “Gauntlet.” Gauntlet takes the traditional practice mode of former Madden games, but adds a mini-game feel to it. With challenges and score tracking the gamemode puts players on the fast-track as it teaches them what they need to know to be competitive in-game.

Defensive play continues with new improvements as EA includes a new camera angle and intuitive defensive line play. Now players will be able to time the snap, execute the fitting move for their controlled player, and elude a block to take down the ball carrier.

All these additions to the game will make playing defense in general a much more exciting and attractive element of Madden 15 and hopefully it creates a more balanced game overall.