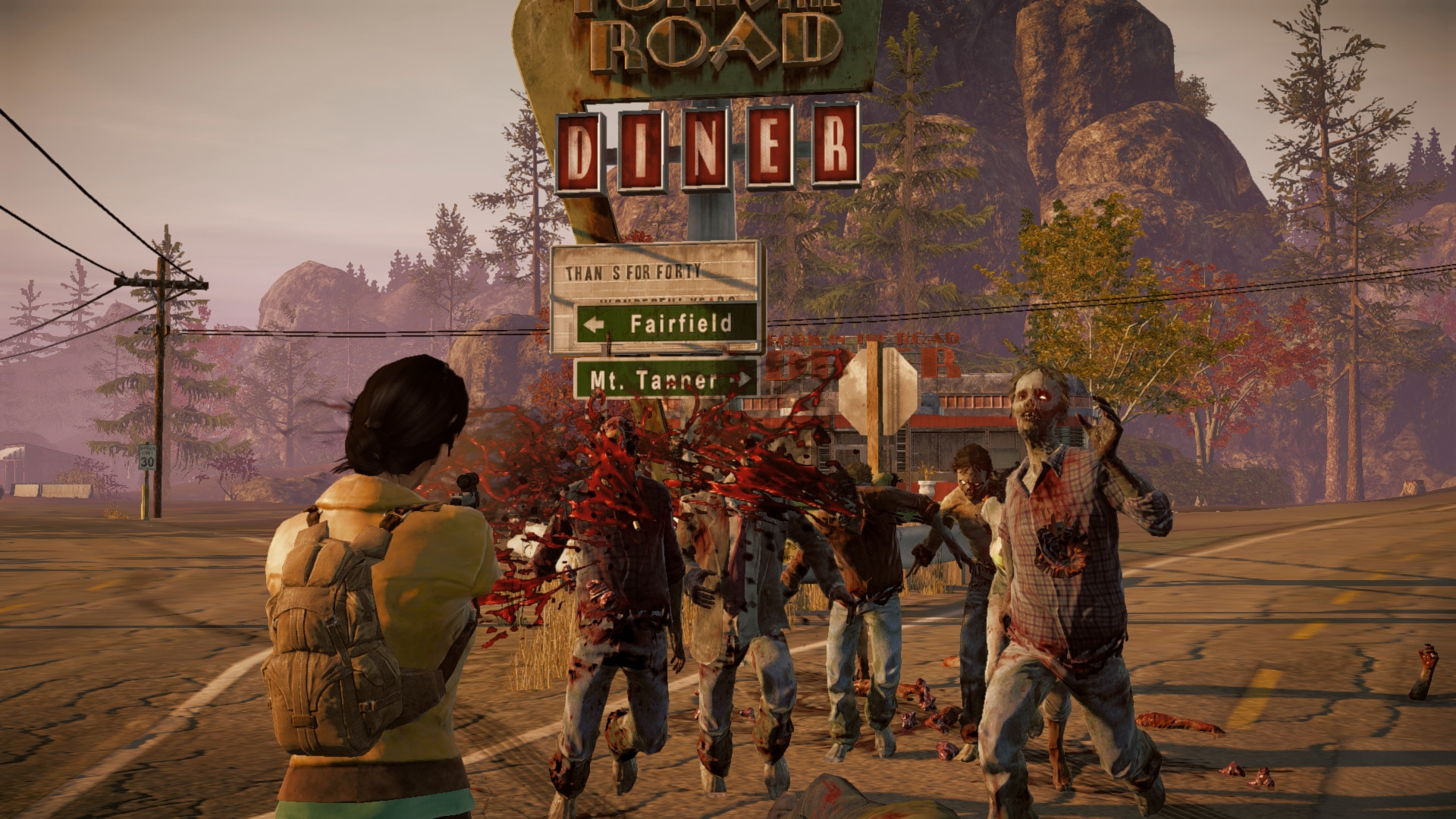 As just an arcade game, you expect a lower quality narrative, weak gameplay mechanics, an underwhelming map, or just a game that gives you what you pay for, but Undead Lab brings all of these things to State of Decay and in their most recent release of Year One: Survival Edition even more of the zombie-killing and community-survival content is made available with the major add-ons Breakdown and Lifeline included for no additional cost.

From the first few initial steps State of Decay seems to be a very one dimensional and linear experience with players taking control of Marcus Campbell who introduces the very basic gameplay mechanics. Over a short 10-20 minute tutorial zone at Tanner Lake some intrinsic concepts for the game are shown to make this zombie action game come to life in its own way. As soon as players understand the basics of the gameplay and learn the best ways to slaughter zombies — whether it be by one of the many firearms (consisting of shotguns, pistols, assault rifles, hunting rifles, and more) or any of the various melee weapons.

Though when the combat does begin it does become evident that there are some issues with the A.I. Too often do the zombies look irate and ready to attack, yet they take the most asinine path to the player and break any sense of immediate fear of the zombies.

The atmosphere is set well, but the enemies can sometimes break that immersion.

Looking past the A.I. trouble, the appreciation for the scope of the map can’t be understated. Trumbull Valley offers a huge slate of land to explore and decapitate the undead in — the world is quickly opened up in a grand fashion with plenty of options for players.

Two small towns, one modest city, and plenty of small isolated farms houses and cottages are present in Trumbull Valley to give players more than enough world to explore and pillage. The world is fairly large, and gives players different types of approaches to traveling through it. Many cars, trucks, and SUVs are scattered across the land that offers the quickest and easiest way to get from point A to point B. But these vehicles are loud, and it’s made clear from the beginning the zeds don’t like loud. So to avoid the constant barrage of the undead attacking it sometimes is best to venture out on foot — but the same idea of noise being bad remains. Running is useful, but it’ll attract a bit more trouble than you might want to deal with. Sneaking is incredibly slow, but you’re certainly safest when keeping your head down. Each method offers its own advantages and disadvantages. The concept of balancing speed and danger is well thought out.

Driving is a bit touchy though. For a game that puts a great deal of emphasis on the medium of travel the control is far too arcade-y to create a fluid experience while driving. After hitting a few zombies there are glaringly obvious coded points where the car is damaged. The lack of a dynamic feel to impacting zombies leaves the driving as very simple and immersion-breaking.

Each area also incorporates a “survey point” high above the ground which reveals a bit more detail about the area. It doesn’t just reveal buildings or structures though. The locations of cars, zombie hordes, and special infected “freaks” are displayed. The hordes usually have roughly ten zombies and are tough to deal with on foot, but the cars come in extra handy here as they can be mowed down in one quick drift through the center of the group. Special infected roam the streets with each proving to be a bit tougher to take down than standard zeds.

The background story is well constructed to adhere to the dynamic gameplay and characters that State of Decay permits. While you do start off with Marcus Campbell, he is certainly not the primary protagonist. There are up to ten possible characters that players can befriend and take control of as they scavenge the zombie wasteland. The ability to switch is well constructed and offers various small twists to how players can approach the game with different personalities and traits to each of these playable characters. Switching is relatively simple to do from accessing a simple in-game journal and selecting the character you’d like to switch to. Though when changing characters you’ll be forced out to a loading menu each time which can break the immersion of the atmosphere.

Characters are made with personality.

As the world is opened up so does a plethora of playable content with an endless stream of potential side missions to take off to. Most consist of either taking down a beefed up zombie with some special abilities or saving a lost survivor under distress. The missions are well constructed, but the basic concepts are fairly simple and can get repetitive if multiple missions are played consecutively — which is tempting to do considering the sheer amount of times that these side missions are made available.

The amount of content in the game is truly the best quality. The side missions are sometimes repetitive, but there is a major emphasis on the pure survival aspect with the playable characters working to gather resources from the deserted and zombie-infested houses within the game world. Things like food, ammunition, and construction supplies are valuable assets in keeping your community flourishing and happy. Where-ever it is that players elect to put up “home base” the amount of customization within the encampment is very respectable with mechanic workshops, weaponry workbenches, watchtowers, and more bonuses and additions to improve the quality of life for the survivors. These available tasks and additions create consistent goals to work towards even when the game’s last main story mission is completed.

The campaign is decent with solid structure though part of me wants a more detailed narrative. The structured parts of the story itself don’t do as much to captivate players as does the bickering heard between survivors and the personality that each person has. Having a detailed explanation of each character’s history does wonders for creating a sense of consideration for others — reiterating that each character is important, but flawed. Some are fitness nuts, some are “movie trivia experts,” and some are even psychopaths among many other character traits.

Despite the A.I. issues and rough un-finished feel, the developers at Undead Labs show a great concept and desire in creating an interesting experience rather than just churning out another generic zombie game. The gameplay makes the wasteland feel one of a kind while the story of each character makes the world feel personal.

And now with this year-one “Survival Edition” has the game going on even when the standard world grows stale. Both Breakdown and Lifeline — two major DLC that had released partway through the Xbox 360 iteration of State of Decay’s lifespan.

Breakdown adds the ability to not plateau as a well-operating community. The add-on offers the same setting as the regular State of Decay with Trumbull Valley and operates as a second game mode. Some new elements are introduced to keep the action going just when you get comfortable. The add-on is a great challenge and gives players that opportunity to unlock more and more possible “heroes” (playable characters) as you accomplish things.

The biggest story change in Breakdown is the immediately evident goal of escaping the town in a run-down RV. As players survive the regular chaos of zombie hordes roaming the streets and special infected terrorizing everything in sight, small bits and pieces to repair the RV are available and scavenged for. Once the RV is finally repaired six survivors can be chosen to join you as you move to “level 2.” The next level is somewhat disappointingly the same map again, but this time with all resources reset. Though there isn’t an extra world to explore, the DLC serves as a great go-to once the standard campaign is completed.

Unlike Breakdown, Lifeline adds an entire new world and story for players to enjoy but this time it’s from a new perspective — the military’s. Almost everywhere you turn in the base game the survivors are constantly complaining of the lack of military aid to the people. Lifeline explains the reasoning behind the military’s actions and makes them seem much less like the “bad-guy” in the game.

This story is set in a dense city just outside of Trumbull Valley. A single highway is the focal point of travel but the environment as a whole is much more condensed than it initially appears. Undead Labs does a great job of making it seem as though the city is massive, when in reality the playable areas are often secluded and divided up into very small sections. In Trumbull Valley you can typically escape to any direction you look, but if you run into trouble here there’s no places to run. This forces players to combat the zombies head-on, and though it’s difficult to do as survivors, the military grade arsenal is enough support to make things a bit easier.

The DLC plays much more like a third-person shooter than it does in the base game. The ability to take a squad with you to rescue survivors or scavenge for supplies adds a different feel to the game, but the close-quarters setting feels claustrophobic and too closed off to be regarded as a must have addition to the core State of Decay experience.

State of Decay: Year One Survival Edition releases April 28 on both Xbox One and PC for $29.99.